Platinum Total Team Roping member David Hull won the biggest payout in team roping history by splitting $348,000.00 at the World Series of Team roping in Vegas in December.  David has been a member since the Fall of 2010 and graciously credits much of his success to being a member of Total Team Roping.

David said he views the videos over and over in the video library composed of over 1500 videos to help you with every aspect of the sport.  He believes if you watch the videos over and over then it is ingrained subconsciously in your mind and then you just have to train your muscle memory to be successful.  He also watches the Total Team Roping TV show each week on RFD-TV for additional advice. There is no time to think of each step when you rope so if you train correctly then every step in roping just becomes natural to you and automatic.

David also loves the personalized aspect of sending in videos and speaking with the Total Team instructors personally when he has a problem or something he wants to work on specifically.   If he needs advice concerning splitting the horns, steer position, or a horse working incorrectly he asks Total Team Roping for advice and they have been extremely helpful.   The instructors especially Charles Pogue has told him keywords to help him remember and helped him deal with pressure.   He said he was not nervous in the short go in Vegas because he felt prepared and he did not let the environment make him nervous.

David has also participated in 2 Total Team Roping Clinics by Bret Beach and Charles Pogue.  He has roped for 35 years and believes Total Team Roping has helped him get to the level he is today.  He said learning from the best has made him a more consistent roper and definitely a winner. 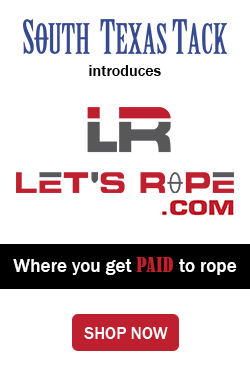